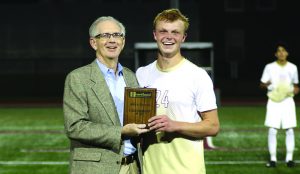 A former stand out at Mercer County is still scoring big at the collegiate level. Former Mercer soccer star Garrett Dean is making the most of his opportunity at Transylvania University.

Dean and the Pioneers competed in the NCAA tournament, which took place on Saturday, Nov. 11, vs. Kenyon College (KC). Unfortunately, the Pioneers dropped a tough game to Kenyon, 1-0.

Dean delivered the game-winning goal and won MVP in the Pioneers’ previous match up against Rose-Hulman, in the Heartland Collegiate Athletic Conference tournament championship, to secure their spot in the NCAA tournament. Dean talk about the goal and the upcoming match up with Kenyon and despite the season coming to an end, Dean talked about the months and games prior.

“It was an awesome feeling to score the golden goal. Our team this year has had a lot of success with our record and how we look at how we’ve been playing overall,” said Dean. “The upcoming match against a traditionally great program like Kenyon is super exciting for myself and the entire program.”

The Translyvania Pioneers have had a stellar season, with a record of 17 wins and one loss heading into their match up with KC.

Dean said he and his teammates did not prepare any differently for their match up against Kenyon, than they have for any one team throughout the season.

“We’ll look at the scouting report, but overall, we just want to make sure we play our brand of soccer and we feel if we do that, then we will have a great chance to win the game and make a run in the tournament,” he said.