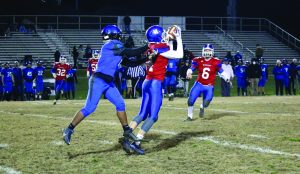 Sophomore Kaelin Drakeford, with ball, stepped in front of an East Jessamine receiver and intercepted the ball, setting the Titans up with great field position late in the third quarter. The Titans defeated the Jaguars 46-21 to advance to the region championship against Collins on Friday, Nov. 17. (Photo by Arpan Dixit)

Say what you want about their regular season record, but the Mercer County Titans (6-5) have proven that the postseason brings out the best in them. The Titans handled the East Jessamine Jaguars (7-4) with ease on Friday, Nov. 10, defeating them 46-21.

Senior wide receiver Trevon Faulkner had a big night. One can argue that this was the senior’s best performance of his football career. Faulkner scored five times, three times through the air and twice on the ground. He dominated the game on both sides of the ball, tallying three tackles along with an interception.

Head Coach David Buchanan talked about Faulkner’s performance as well as the play of his offensive line, who arguably had their most impressive performance at a time when it mattered the most.

“Trevon is a great talents but also a great competitor that usually shows up in the biggest games,” he said. “Our front had it’s best game since the Rockcastle game last season. They played extremely well and were very physical.”

Junior linebacker Jamason Sherrow led the team in tackles with 16, while his teammate, Blake Russell, was second with 14.

Senior quarterback Gunnar Gillis, like Faulkner, didn’t want this to be his last game either. Gillis completed nine of his 18 passes, for 202 yards and four touchdowns. The most important stat of the night was Gillis’ protection of the ball with no turnovers. Credit must be given to the Mercer offensive line, who dominated the line of scrimmage.

“We have been preparing better and it is showing on Friday nights. It is pretty straight forward,” he said. “Earlier in the year we have a bunch of guys missing practice for injuries and illness. We played like we were not practicing and we were having a bunch of guys miss important practice reps.”

The Titans will travel to take on the Collins Titans in Shelbyville on Friday, Nov. 17, for the region championship. Kick off is set for 7:30 p.m.