The Boyle-Mercer Joint Jail Committee is creating a criminal justice coordinating committee. The committee, which consists of representatives from law enforcement, jail staff, attorneys and local elected officials, will look at how to change not just how Boyle County Detention Center operates, but how the two counties administer justice.

The committee is a suggestion from the National Institute of Corrections, who surveyed BCDC this summer.

Population at BCDC declined to 351 last Tuesday. Even though the jail was built to hold 220 inmates, the population has reached 400 several times this year, causing jail staff to ship prisoners to Casey County.

While the population is down, the cost of running the overcrowded jail has skyrocketed. The two counties will pay $115,000 more for inmate health care this year than last.

Mercer Magistrate Dennis Holiday was appointed Tuesday to represent Mercer County on the committee Tuesday for the Mercer County Fiscal Court. The committee will meet once a month, said Judge-Executive Milward Dedman. The first meeting has not been scheduled yet.

In addition to Holiday, membership of the committee will include the judge-executives, county attorneys and jailers from Boyle and Mercer counties as well as another magistrate from Boyle. There will also be representatives from non-residential treatment services, Kentucky Probation and Parole, the public defender’s office, Ephraim McDowell Health, the Commonwealth Attorney’s office and representatives from local law enforcement agencies in both counties.

One group who will not serve on the committee are the local judges. Citing concerns over possible litigation, Circuit Court Judge Darren Peckler has directed the judges to not participate.

Boyle County Attorney Lynne Dean said she would speak with Peckler further about the possibility of involving judges in the committee.

Representatives from Brandstetter Carroll Inc.—a consulting firm with offices in Lexington who are being paid $75,000 to reduce recidivism, improve rehabilitation, control jail costs and shrink the overall population—will attend the meetings.

Brandstetter Carroll representatives met with the jail committee last week. They are ready to start work, but they said their survey would be meaningless unless it resulted in concrete action taken to solve the problem.

“There are probably people in that jail who don’t need to be in that jail,” said Kenneth Ray of Brandstetter Carroll. According to the jailers report, 102 inmates were in jail for contempt of court, while 43 percent were in jail for failure to appear and 29 were there for failure to appear—citation for misdemeanor. Of the top five charges at BCDC, only two—possession of drug paraphernalia (79 inmates) and 1st-degree possession of methamphetamine (64 inmates)—were actual crimes.

Ray, who has served in the criminal justice system since 1976 as both a law enforcement and corrections officer, said if the two counties really wanted to change the jail population, they needed to change what they incarcerate people for.

Ray said Mercer and Boyle lack any kind of facility to deal with vulnerable populations—drug addicts, the mentally ill—except the jail

“You don’t have crisis beds,” he said. Nor do they have specialty courts, such as a drug court that would deal with only drug offenses, which local prosecutors say makes up at least 80-percent of their case loads.

Even if the new committee manages to reduce the number of people being incarcerated, that still leaves the jail, which is poorly designed, Ray said. He said BCDC has poor sight-lines that prevent guards from keeping better control over the population.

That would get worse once the counties reduced their population to only those who actually belonged in the jail, who would be a much more dangerous crowd than nonviolent drug offenders.

“The way your jail is designed is dangerous,” Ray said. 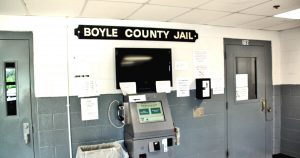 Mercer and Boyle Counties are creating a committee to address overcrowding at the regional jail.