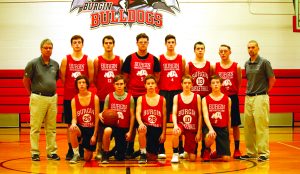 The Burgin Bulldogs will rely heavily on youth this season. Juniors Cameron Hurst (top row, third from left) and Ethan Kestler (bottom row, second from left), being the oldest on the team, will step into new roles as leaders this season. For complete roster, check out this week’s issue of the Harrodsburg Herald. (Photo by Arpan Dixit)

With no seniors on the Burgin Bulldogs this year, Head Coach Don Irvine is looking for leadership from his juniors, Cameron Hurst and Ethan Kestler. The Bulldogs will also look to replace their top three seniors from last season: Philip Hockensmith, Jordan Hurst and Micah Dunn.

“Those three provided a lot of leadership on and off the court,” said Irvine. “It’s hard to replace leadership like that. We have one starter returning from last season and that’s Cameron Hurst.”

Jordan Hurst averaged 15.9 points per game last season, Dunn averaged 13 points and Hockensmith averaged 6.4 points. The Bulldogs will have to replace over 30 points per game and Irvine knows that will be a tough task. Irvine said  he relied too much on his seniors last season, and things this year will be a little different, and they have to be, with such a young squad.

“Last year I let the seniors kind of lead and show the younger guys the ropes,” he said. “This year has to be different. We have a lot of guys who haven’t had varsity experience in the past so we are going to be working on a lot of fundamentals as well as trying to get a better feel for the game.”

The Bulldogs went 14-15 last year, which included a stretch of winning five straight games in the middle of the season.  The Bulldogs have a lot of new faces that will be on the court. Irvine talked in detail about some of the guys he expects to take on bigger roles.

The Bulldogs will be travelling a lot this season, more than years past, but Irvine believes that will help the team in the long run. “I absolutely believe playing on the road and playing in different environments will help the team towards the end of the season,” he said. “They spend more time together on the road, eat together, so that will really be helpful for them.”

Irvine said he likes his team and it’s more about giving back to them as this point in his career rather than keeping up with wins and losses. Irvine is looking forward to the upcoming season and hopes to help these kids gain a better understanding of the game of basketball.

The Bulldogs will open their season on Tuesday, Nov. 28, when they travel to Trimble County. Their home opener will take place two days later on Thursday, Nov. 30, when they host St. Francis.