Burgin residents can all be thankful for one thing this Thanksgiving: principal construction work on the city’s sewer system is almost completed.

Only two laterals need to be installed, said Mike Sanford, general manager of the Mercer County Sanitation Department. The last contractor should be finished by the estimated completion date of Nov. 19, Sanford said.

However, Burganites will have to put up with damage from the project until the spring. Paving season is almost over, and that means some streets damaged by the construction—and, in some cases, resident’s yards— will not be repaired until at least March 2018.

The District’s first priority will be cleaning up streets to see what shape they’re in. They will look for roads that were not cut to install sewer lines but were damaged by 18 months of construction.

The board of directors spent a large portion of their meeting last week discussing property damage claims. Many residents are being asked to be very patient. Their yards were torn up to install sewer lines, and they will have to wait until next year before their yards will be repaired. The District will provide what coverage they can, but a full clean up will not be possible until spring, Sanford said.

The District will soon issue the first warning letter to residents who have not connected to the system. The list does not include people waiting on contractors to start work or waiting on the USDA for financial assistance.

Connection to the sewer system is mandatory. Anyone who does not hook up could face substantial penalties, including fines and possible jail time.

One of the biggest objections to the sewer system is the cost. The minimum fee is $40 for 2,000 gallons. The District has asked Strand Associates Inc. to look at lowering sewer rates. 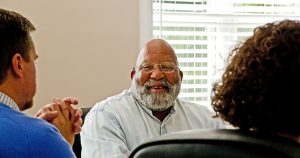 James Dunn, chairman of the Mercer County Sanitation District, listens to a progress report on the Burgin sewer project, which Dunn and other board members have been working on since 2008

“This is the biggest job we’ve ever done,” marvelled Larry Catlett, attorney for the Sanitation District. Work began on creating a sewer system in Burgin back in 2008.