That’s the verdict from the auditing firm, White and Company of Lebanon.

Joseph A. Montgomery, a CPA from White and Company, presented the new audit to the Burgin Board of Education last Wednesday.

The last several years, the school 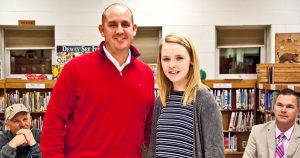 Burgin Principal Chris LeMonds stands with Burgin High School senior Eden Smith, who attended the Governor’s Scholarship program with 378 students from across Kentucky in Morehead State University this summer. “It was an amazing experience,” Smith said.

district has recorded a negative fiscal position because changes in accounting law have forced schools to record their pension liability as a debt. Despite this, Burgin’s position increased $237,754 this year, from -$185,488 to $52,266 for the year.

“That’s a good number for a school this size,”  Montgomery said.

All together, Burgin’s share of the Kentucky Teachers Retirement System’s unfunded liability amounts to over $19 million, Montgomery said.

“It gives you a feeling for what all this fighting is about,” he said.

Montgomery said Burgin has received an “unmodified opinion,” meaning the audit was clean. The auditors did recommend that club sponsors should complete properly approved purchase orders before making purchases.

“It did not rise to the level of a deficiency,” Montgomery said.

Burgin administrators said they had taken measures to ensure purchase orders were completed and approved before funds were spent.

“It was a good, clean audit,” Montgomery said.