The temporary lane closure on the Brooklyn Bridge, which carries U.S. 68 over the Kentucky River, remains in effect.

“The contractor currently anticipates returning to work on the bridge prior to the onset of winter weather,” said Natasha Lacy, information officer with the Kentucky Transportation Cabinet, Department of Highways.

The bridge’s eastbound lane has been closed since August. When the contractor stripped away the paving down to the deck, they discovered unexpected deterioration in the metal and pulled out of the project.

State engineers and the contractor have implemented changes to the bridge repair contract.

One lane will remain open at all times while the contractor works on the bridge, Lacy says.

Motorists are advised to use US 27 and KY 152 as a detour. The public will be informed of any changes through updated advisories furnished to media outlets. 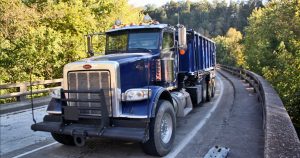 A dump truck crosses the Brooklyn Bridge, which has been down to one lane since August. A state official says repair work—which will be more extensive than originally planned—will be started before winter.