The smash-and-grab bandit behind nearly 20 vehicle break-ins locally and crimes across the commonwealth is facing justice here in Mercer County.

Dario Mauriz-Cruz, 25, of Lexington, pled not guilty in district court on Monday.

Mauriz-Cruz was arrested in Bourbon County by the Kentucky State Police after being spotted in Lexington driving a car with stolen license plates.

Early in October, Mauriz-Cruz struck at the Fountain View subdivision and near the railroad tracks on Bohon Road and at the Lee Oaks subdivision off Warwick Road.

The chief deputy believes Mauriz Cruz used a device to shatter windows, then he would steal anything he found of value, including weapons, money, electronics and credit cards.

The credit cards would be used to purchase gift cards and electronics like iPads, Elder said. 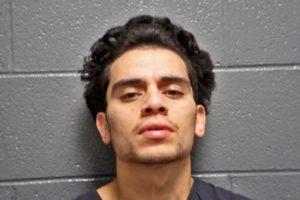 Dario Mauriz Cruz of Lexington is accused of breaking into nearly 20 cars in Mercer County last month, as well as a rash of crimes in 20 other counties.