“Shrek! the Musical Jr.” will bring the characters from the beloved film series to the state at Ragged Edge Community Theatre from Nov. 10-12 and 17-19.

Shrek and a whole cast of characters are coming to Harrodsburg with a story fans of the film will recognize and be surprised with at the same time.

Allan Barlow, managing director at Ragged Edge, says this production will provide the audience with all of their favorite moments from the film, while giving them some new favorites.

“Shrek! the Musical is based on the original film that everyone knows and loves,” Barlow said.

The audience will be also discover that the background of the main characters will be explored and built upon in the show.

The production has been a major success with introducing new cast members to the Ragged Edge. 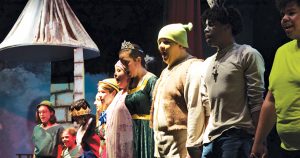 The Ragged Edge is bringing Shrek Jr. to the stage in a show that has something for everyone.

“We have a bunch of kids we’ve never had in the theatre,” Barlow said, “Lots and lots of new faces coming which is exactly what you want to see.”

Tickets are available now at the Ragged Edge box office. For more information on Shrek and other productions, call the theater at 734-2389 or visit their website at  www.raggededgetheatre.org.