Both Sen. Tom Buford and Rep. Kim King have come out as no votes to the plan, which is drawing opposition from state and local employees across the commonwealth.

Buford has been a no since the governor, along with Senate President Robert Stivers and House Speaker Jeff Hoover, announced the proposal last month. However, King has refused to state an opinion until she saw a draft of the legislation, which was released last week.

In a Youtube video posted  Monday, King said she spent 28 hours poring through the 505-page document. She said there were three components she found “very, very good” but four components she considered “bad.” 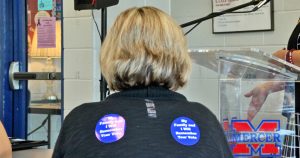 including one she called an “automatic deal breaker.” However, King did not disclose which parts of the proposal she objected to.

Bevin’s proposal would increase teachers’ contributions from 9-percent to 12-percent of their annual paycheck, freeze their accumulated sick day compensation and freeze their cost of living adjustments, which teachers pay for before they retire.