French Henry was wearing a poppy to commemorate the 100th anniversary of World War One. She said 90,000 Kentuckians served in the so-called “War to End All Wars” and over 2,000 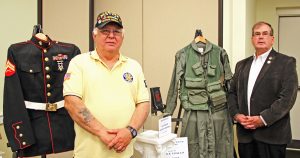 Veterans Jack Mattingly (Marines) and Mike Inman (Air Force) pose by uniforms. The dress blues were donated by Chris Logan while the flight suit was worn by Inman when he served. 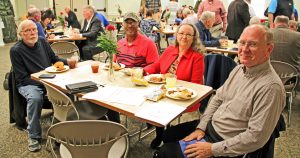 From left: Tony Sexton, Rick Lee and Bonnie and Don Rightmyer enjoyed the lunch provided by the Mercer County Public Library on Monday.

were lost. In most high school history textbooks, the war barely merits a paragraph, she said.

“We have got to teach our children about our history,” said French Henry.

A former Miss America, French Henry said she was made sensitive to the plight of veterans returning home from war by watching her father and her uncle go from “tragedy to triumph” after serving in the Vietnam War.

After her speech, French Henry handed out pins to the veterans. In addition to her speech, lunch was served and a special exhibit featuring military memorabilia donated by local veterans was unveiled. The exhibit will remain open for the rest of the month.