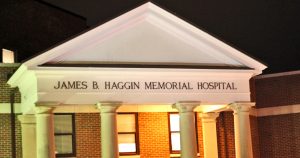 Local leaders are glad the James B. Haggin Memorial Hospital—one of the biggest employers in Mercer County—is keeping its doors open.

They are almost unanimously glad Haggin is keeping its doors open, but they worry how the takeover will affect the community.

“You hate that it happened, but if it was the only way to save the hospital,” said Mercer Judge-Executive Milward Dedman.

“That’s the important thing, that they’re taking care of the employees and we’ll still have a local hospital.”

Due to regulatory and licensing issues, the agreement will not be finalized for at least a month. However, McDowell will manage Haggin until Dec. 1.

The hospital, which was founded in 1913, will be renamed the Ephraim McDowell James B. Haggin Memorial Hospital. Haggin will continue to have a local board of directors and a chief administrative officer, who will also be a part of the senior leadership team at McDowell.

Dedman stressed the importance to the local economy of keeping Haggin open.

“It’s really important to the county,” he said. “They’re one of the largest employers in the county.”

Roughly half of the commenters on the Harrodsburg Herald’s Facebook page were for the takeover, while half opposed it.

“That’s like any decision,” Dedman said. “You’ll have some people who like and some who don’t. I just hope it all works out.”

“It may work out to be a good thing for us,” Long said.

However, the mayor was concerned about a comment made last week concerning the fate of the former Wilderness Trace YMCA building—which the city owns and leases to Mercer Area Family Education and Wellness (MAFEW).

When asked if McDowell still planned to use part of the building to house a gym, McDowell Vice-President Keith Bridges said, “We have to look at the big picture.”

MAFEW Chief Executive Officer Debrah Pierce said the agency is still planning to lease one floor of the building to McDowell at the start of 2018. “As far as I know, we’re still on schedule,” Pierce said.

She said she is not currently in contact with anyone from McDowell, but said the agency was happy to have the healthcare provider as a tenant.

“We’re certainly looking forward to working with Ephraim McDowell on this project,” Pierce said. “As far as I know, it’s a go.”