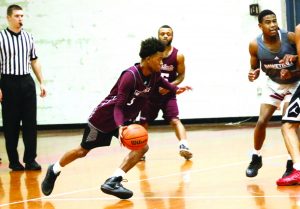 Detrick Alcorn (with ball) scored 26 points for his team, including seven three pointers in the first half. Alcorn, along with Cody Taylor (behind Alcorn) who scored 30, were the two center pieces in the Maroon team’s comeback. (Photo by Arpan Dixit)

Since the merger in 2006, the old Harrodsburg High School seemed to just be an old building with lots of history. Now, it is the home of the Campbellsville University Tigers basketball team, for the Conover Education Center campus.

The Tigers were originally scheduled to have their home opener against Georgetown College on Wednesday, Nov. 1, but it was cancelled.

Due to the cancellation, a Maroon/Grey game was played in front of a small crowd at the new Mercer Transformation Center.

Head Coach Sean Tyree coached the grey team, while assistant coach Dalton Christopher coached the maroon team. Christopher’s maroon team won the game 121-115. Tyree talked about the game and being able to play in front of the city.

“It was very exciting. The community game illustrated our towns’ spirit,” he said. “Having our community come together to watch us play, showed the town has a lot of spirit when it comes to basketball.”

The Maroon team was down big early, more than 15 points, but made a furious comeback with the help of Detrick Alcorn and Cody Taylor. Taylor runs the offense playing point guard, while Alcorn is a gifted scorer playing the shooting guard position.

Taylor had a game-high 30 points, and Alcorn was right behind him with 26 points. The Maroon squad had two other players in double figures, Zach Jones with 14 and Damian Burdette with 21.

The grey squad was led by Devin Baker, who scored a team-high 18 points and had four other teammates in double figures as well. Patrick Barnes, Dre Fulz and Brandon Tyree had 14 points each and Chris Bartels added 16.

The Tigers will be back on the court for their first official home game on Wednesday, Nov. 8, when they host Union College. Tip off is set for 7 p.m. at the new Mercer Transformation Center.