After months of speculation and rumors, the news is out: the James B. Haggin is joining Ephraim McDowell Health.

The announcement was made on Monday, Oct. 30, by the management of both Haggin and McDowell. Haggin will retain its tax identification number and become a subsidiary of McDowell Health. The financial terms of the agreement were not disclosed.

Due to regulatory and licensing issues, the agreement will not be finalized for at least a month. However, McDowell will manage Haggin until Dec. 1.

The hospital, which was founded in 1913, will be renamed the Ephraim McDowell James B. Haggin Memorial Hospital. Haggin will continue to have a local board of directors and a chief administrative officer, who will also be a part of the senior leadership team at McDowell. That job has been offered to Haggin’s chief executive officer and president, Victoria Reed.

Haggin Chairman Jim Ingram listed a variety of reasons why the takeover made sense. Ingram specifically cited the cost of maintaining the facility, the oldest part of which dates back to the 1940s, high turnover of physicians and changes in the way healthcare is paid for by both private insurers and the federal government. Since the 1980s, the hospital has been forced to hire outside companies to run the emergency department and the surgical unit, said Ingram, who has served as chairman at Haggin for 29 years.

When McDowell management approached Haggin about taking over the hospital earlier this spring, Ingram called it “a godsend.”

The larger nonprofit has the leverage to negotiate better terms with both suppliers and insurers, said McDowell President and Chief Executive Officer Sally Davenport.

The hospital has an agreement with the federal government that allows beds to be used for acute care or as stepdown rehab beds for patients who need longer to heal.

“Frankly, it’s a better reimbursement rate for us,” Davenport said.

She said McDowell was also interested in trying to retain Mercer residents who have been seeking medical treatment outside the county.

When asked if McDowell would be phasing out any programs currently offered at Haggin, Davenport said, “Not at this time.”

McDowell officials are promising no cuts in staffing or services at Haggin.

“We are not intending on having layoffs of James B. Haggin employees,” Davenport said. She did say management would evaluate the “best niche” for all McDowell employees. 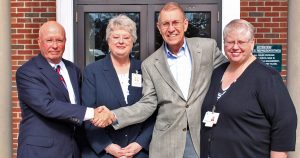