Although Mercer’s soccer season ended earlier than he would have hoped, senior Brandon Ballard can add another accolade to his resumé.

Just a few days after a season ending loss to Campbell County in the semi-state tournament round, Ballard was named first team all-state for his accomplishments during the 2017 season.

This is Ballard’s second all-state honor. He was named second team all-state during his junior season.

“I didn’t change anything going into my senior year. I worked just as hard in the offseason as I did my junior year,” said Ballard. “This year, I found myself in more scoring positions because of great passes from my teammates and that’s why I was able to score as much as I did. That’s mainly what changed for me, and I’m honored to be chosen first team all-state.”

“Holding all of those individual records is an amazing feeling, but I couldn’t have done any of it without the help from my teammates,” he said. “In my personal opinion, winning region three years in a row and winning three district titles during my high school soccer career is way more important than any other individual accomplishment. It just shows how far along soccer has some in Mercer County.”

A lot of athletes improve as they get older, but that doesn’t just come with age. Having the drive and determination to get better each and every day was the reason Ballard saw such improvement throughout his career. 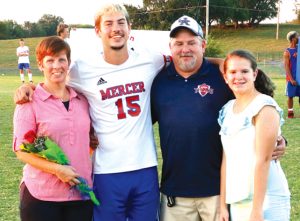 Brandon Ballard (15), pictured with his parents, David and Heiki Ballard, and sister Lucy, capped off a historic season for the Mercer County Titans soccer team. (Photo by Arpan Dixit)