UPDATE: Copies of “Thelma’s Treasures” are still available at the Harrodsburg Herald (101 West Broadway, open Monday–Friday from 8 a.m. to 5 p.m.). 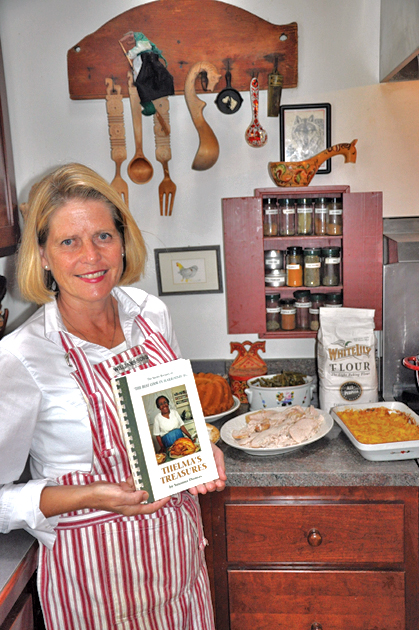 Susanna Thomas hopes to bring the essence of Thelma Linton to an entirely new generation with a special twenty-fifth anniversary edition of “Thelma’s Treasures.”

Twenty-five years ago, Susanna Thomas found herself beside Thelma Clay Linton in the frozen food aisle of Gateway in Harrodsburg, far from Thomas’s native home of Manhattan. As they sat with the first copies of “Thelma’s Treasures: The Secret Recipes of The Best Cook in Harrodsburg,” it was the culmination of nights spent carefully calculating measurements and portions, testing ingredients, and capturing the essence of Thelma herself. As the first customers approached, neither Thomas or Linton could have predicted what was to come.

“Thelma’s Treasures” reached far beyond Harrodsburg. Letters and phone calls from all over the country poured in with raving reviews of Thelma’s recipes. Copies of the book flew off the shelves. The original plan was to print 500 copies, 100 to be distributed to family and friends, while the remaining 400 would make up for the publishing costs. Within the first four days 2,000 copies had been sold. Another 2,000 were sold within the following days. Thousands of copies made their way across the country, taking with them a small sample of the woman known all over Harrodsburg for her southern recipes.

Thelma Clay Linton passed away in 2010 at the age of 101, but her memory remains alive for those who still have their copy of her recipes. Thomas says she hopes to bring Thelma’s recipes and love for her community back to the forefront with a new run of the book.

“I think at some point she realized that I really appreciated her culinary treasure trove, and I wanted to preserve it,” Thomas said, “We really became friends.”

Thomas moved to Kentucky in 1984, leaving behind a publishing job in Manhattan. In 1988 she married her husband, Jim, who introduced her to Thelma, and her husband, Sterling. Sterling worked with Jim at Shaker Village of Pleasant Hill.

“They were just wonderful to me,” Jim said, “I have such great reverence for both of them.”

When Thomas met Linton in 1988, Linton was 83 years old and still cooking meals for churches and events around the community. Linton never had any children, and Thomas was concerned the recipes would be lost forever if they weren’t preserved.

“Thelma’s Treasures” is returning for a limited run, mostly for Harrodsburg. Pre-orders are available now at www.thelmastreasuresky.com.

The book will be available for purchase and Thomas will have a special signing of “Thelma’s Treasures” on Small Business Saturday, Saturd