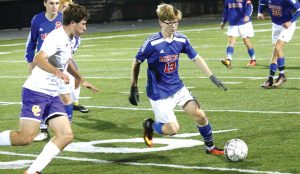 After an emotional win last Thursday to capture their third straight 12th region title, the Mercer County Titans soccer  (12-9-3) team had to halt the celebration and prepare for their semi-state match up against the Campbell County Camels (15-6), out of the 10th region. The Camels were able to hold off Mercer after scoring the first two goals of the game and defeated the Titans 2-0 on Monday, Oct. 24.

On a rainy and sluggish night, the Titans and the Camels faced off for a berth in the final eight in the state tournament.

Head Coach Garrett Stark talked about the game after the final whistle.

“I think we did have some good set piece opportunities in the game and Hunter (Booth) had two really good looks that just barely missed. I think our rhythm was off a little during the game due to a very emotional week last week in the region tournament,” he said. “Last week took a lot out of the boys mentally and physically where we played three games in three days last week.”

Ballard and fellow seniors Trey Releford and Austin Bartley might have played their final game in a Mercer uniform, but their impact on the program will carry on.

Stark was disappointed that the Titans weren’t able to get their first state tournament win in school history, but was proud with the way his team ended the season.

“This season, we knew would be a process. We knew we were young with only four returning starters from last year and only three seniors this year,” he said. “This team worked extremely hard and fought hard all the way to the end. The younger players know what it means to be a Titan and that has a whole lot to do with all the great alumni who have come through our program.”