Local educators have a short answer to Gov. Matt Bevin’s proposal to save Kentucky’s pension system, which he has called, “Keeping the Promise.”

“It doesn’t keep any of the promises,” said Superintendent Dennis Davis.

Davis called the proposal, which was authored by the governor as well as Senate President Robert Stivers and House Speaker Jeff Hoover, “another step that’s going to destroy public education.”

The Teachers Retirement System (TRS) is the largest of the eight different retirement plans administered by Kentucky Retirement Systems. TRS has 51,563 retired teachers drawing benefits while 71,848 active teachers are paying into the program. Under an agreement with the federal government dating back to 1938, teachers do not qualify for Social Security, so they are totally reliant on their state pensions.

While the proposal does not contain some of the more controversial measures made by a financial advisory group hired by Gov. Bevin—including ending defined-benefits pensions in favor of less generous defined-contributions accounts for all teachers, a raise in the retirement age to 65 and the “clawback” of a previously awarded cost-of-living adjustment (COLA)—what’s in the proposal troubles Davis and other local educators deeply.

Under the governor’s proposal, teachers who worked 27 years would have their plans switched to retirement savings plans known as 401(a) plans. While the Republican leaders in Frankfort are saying the 401 (a) plans “will provide comparable benefits” it has been noted that defined contribution plans only work when the market is trending up.

Under the proposal, teachers would increase their pension contribution from 9.105 percent of their pay currently to as much as 12 percent while

the state would reduce its contribution from 5.84 percent to 4 percent  and school districts would need to pick up 2 percent, according to an analysis from the Kentucky Center for Economic Policy (KCEP). This would come on top of increased contributions schools have already been forced to make to the certified employees’ retirement fund.

Once enacted, teachers would also be expected to pay 3-percent more for their health benefits. The proposal would also suspend COLAs for five years, which rankles local educators, who contribute 1.74 percent of their pay towards COLAs.

“That’s taking money away from me,” Davis said.

On average, teachers retire at age 59 with 30 years or more of service, Davis said. Under the proposal, teachers would be forced to retire after 27 years to preserve their benefits. He said Mercer could lose a quarter of their staff if the proposal goes into effect.

The mass retirements would not only cost the District their most experienced personnel, it would also leave administrators scrambling to find substitute teachers. Davis said most of Mercer’s substitutes are retired teachers, however, under the Republican plan, any educator who takes another job in the public sector would have to suspend their retirement, even if they moved out of the state.

“We can’t even come in as mentors,” said Mercer County Board of Education Chair Marianne Davis, who is a retired teacher.

Rep. Kim King has not said whether she’ll vote for the governor’s proposal or not.

“We still don’t have a bill to read and research,” King said. “I don’t make voting decisions based on press releases or Association opinions.”

“I am a NO,” said Sen. Buford. “Based on what I have been able to determine and my understanding: for the next 10 to 12 years this plan offers no financial benefit to reduce the need for funding the ARC. In fact, it requires more revenue than in years past due to no new employee contributions and yet a need for revenue to match 401 (a)s.”

It would cost between 42 and 93 percent more to provide the same benefits teachers currently enjoy through 401 (a) plans, according to the KCEP. 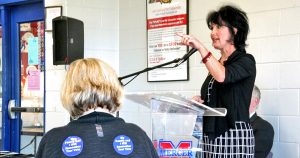 Rep. Kim King refused to say if she would vote for the governor’s proposal in a special session on the grounds she had not seen the bill. 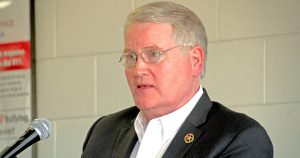 Sen. Tom Buford said the state had an “inviolable contract” to provide pensions to educators, and that the governor’s proposed changes were both “immoral” and “unconstitutional.”