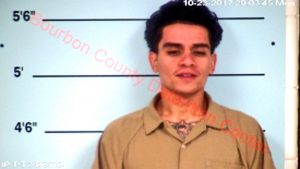 Dario Mauriz-Cruz is being held in Bourbon County jail. He is charged with committing 18 car break-ins in Mercer County.

Police believe they have found  the smash and grab bandit behind 18 vehicle break-ins in Mercer County on Oct. 6.

Dario Mauriz-Cruz, 25, of Lexington, was arrested Monday, Oct. 23, in Bourbon County by the Kentucky State Police.

Mauriz-Cruz was spotted in Lexington with a license plate that didn’t fit the car he was driving. He led his pursuers on a chase until they finally stopped him in Bourbon County.

“He’s an overachiever, that’s for sure,” said Capt. Scott Elder of the Mercer County Sheriff’s Department. Elder is the lead investigator in the break-ins.

Mercer County has filed  warrants against Mauriz-Cruz, but Elder said he had no idea when the accused burglar would face the judge here in a Mercer court. He is currently being held in the Bourbon County Jail. “Everybody wants to get their hands on him,” Elder said.

Elder said Mauriz-Cruz, who was convicted on charges of burglary and receiving stolen property in Fayette County in 2015, used a window punch device to shatter windows. He would then steal anything of value, including weapons, money, electronics and credit cards.

The credit cards would be used to purchase gift cards and electronics like iPads, Elder said.

Mauriz-Cruz  was possibly using a real estate app like Zillow to find housing developments, Elder said. Earlier this month, Mauriz-Cruz is believed to have struck at the Fountain View subdivision and near the railroad tracks on Bohon Road and at the Lee Oaks subdivision off Warwick Road.