There has been no hangover after last week’s Oktoberfest. The street festival has left many local merchants thirsty for more.

“I think we need not only an Oktoberfest, but a festival for Mardi Gras, or St. Patrick’s Day or James Harrod’s birthday,” said Jerry Sampson, owner of J. Sampson Antiques and Books on Main Street.

“I just thought it was amazing,” said Sampson. On Saturday, he tried to count all the customers who came through his doors.

Sampson said the second Oktoberfest was better than the first because he was ready for it. He had more people working in the store, including his mother, Shirley.

“Last year was scary,” he said. “I was unprepared.”

Anna White, owner of Scrubs ‘n’ Stuff, also said preparation was key to making the most of the festival.

“I put some stuff on the sidewalk and kept the door open and people came in,” White said. “I did a whole lot better than last year.”

White wasn’t quite as enthusiastic as Sampson was about having a street festival for Mardi Gras in February or St. Patrick’s Day in March.

“It would be cold,” White said, before adding, “I would try it.” 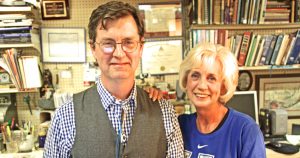 Jerry Sampson, pictured with Shirley Sampson during Oktoberfest, said his only problem with the street festival is it only happens once a year. 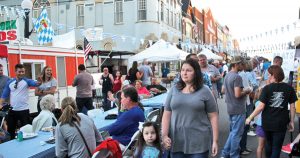 Despite some issues, including power outages and missing entertainment on Sunday, local merchants and civic leaders are happy with the big crowds who thronged Main Street during Oktoberfest.

Rod Helton, who owns Charmed Antiques on East Office Street, said his only problem with Oktoberfest was that it didn’t go far enough. “I just wish they could bring it all the way up here,” Helton said.

Even though the street festival ended on Short Street, Helton was happy with the business Oktoberfest brought his way. He pointed out the empty spots where visitors carried away furniture. “People came back and bought a lot of furniture,” Helton said.

Tim Kazimer, the owner of Kentucky Fudge Company, would also like to see Oktoberfest come up the hill next year. In addition to the restaurant, Kentucky Fudge also had a stand set up on the street selling sweet tea and sangria. “I was really pleased to see so many out-of-town folks,” Kazimer said.

Jack Coleman, who ran  the Triple J and C barbecue stand on Poplar Street, was also impressed with the crowds at Oktoberfest.

“We had people come who had German accents,” said Coleman, who was selling German dishes at his stand.