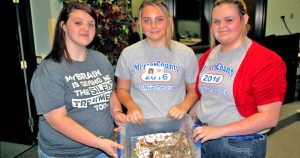 Member of the Mercer chapter of Teens Against Tobacco Use—Allison Graham, Miranda Dunn and Emma Brown—show the cigarette butts and containers they collected in 20 minutes at the Mercer County Senior High School parking lot.

The board of education voted unanimously to adopt a 100 percent tobacco free policy at their meeting last Thursday. The policy, which covers all tobacco use including alternative nicotine products and vaping, will apply to all students, all school personnel and all visitors while they are in board-owned buildings or vehicles, on all school property and even during school-related student trips.

The ban will not be enforced until signs are put in place to inform the public, said Mercer Superintendent Dennis Davis. Davis said the signs should be in place by Christmas.

While the buildings owned by the district are tobacco free, tobacco use was allowed on the campuses. Recently, members of the Mercer County chapter of TATU (Teens Against Tobacco Use) collected cigarette butts and containers from the Mercer County Senior High School parking lot. Within 20 minutes, they’d filled a plastic box.

Kentucky’s rate for youth smoking is double the rate for the rest of the nation, according to the 2015 Youth Risk Behavior Survey, which was complied of 37 state surveys and 19 large urban school district surveys conducted among students in grades 9–12.

The smoking rate for high school students in Mercer County is even higher, according to Emily Steer, the smoking cessation specialist at the Mercer County Health Department.

“I am here to reduce the number of people who use tobacco,” Steer told the school board. “It’s not that easy a job here in Mercer County.”

While Steer leads tobacco cessation programs, such as the seven-week No Butts series of classes, which started at the Health Department on Oct. 17, the best way to reduce tobacco use is to stop kids from starting. She said North Carolina had seen a 40-percent reduction in youth tobacco usage since a statewide school ban on tobacco use was adopted.

TATU has received a grant to pay for the signage, Steer said.