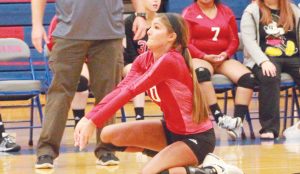 Senior Savannah Burke goes for a dig during the Lady Bulldogs loss to West Jessamine in the 46th district tournament on Monday, Oct. 16. (Photo by Jared Holt)

Despite facing a powerhouse West Jessamine team that made it to the Elite 8 in the state tournament last year, the Lady Bulldogs volleyball team showed they weren’t intimidated by anyone’s reputation Monday night in the opening round of the 46th District Tournament.

Service errors prevented either team from getting into a rhythm early in the first set.

The score was tied at 3-all before the Lady Colts caught fire, winning 22 of the next 25 points, claiming the first set, 25-6.

In the second set, Burgin showed they wouldn’t go down without a fight. West Jessamine jumped out to a 5-2 lead, before a kill by Lady Bulldog Savannah Burke ignited a rally. Burgin’s Hannah Stewart held serve for four points following Burke’s kill, giving her team the lead, 7-5.

“The second game the girls were having fun. They played fundamental ball, and just had a great time with it,” said Burgin Head Coach Doug Rulon.

West Jessamine tied the game at 7-all, but Burgin quickly reclaimed it, 9-7. Their lead grew as large as 3 points, 12-9, before the Lady Colts tied the game at 12-all. Despite losing the lead, Burgin continued to fight and trailed by just three points late in the competition, 21-18. The Lady Bulldogs would get no closer, as West Jessamine won the last four points, taking a 2-0 lead, 25-18.

“That third game I think it got into their heads that their time on the court was coming to an end,” said Rulon. “I think they just got hung up on that, and weren’t able to replicate the way they played in that second game.”