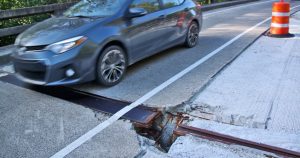 Work on the Brooklyn Bridge, which carries US 68 across the Kentucky River, was originally scheduled to be finished on Aug. 11. The new completion date is Monday, Nov. 6.

The contractor will return to work on the Brooklyn Bridge in approximately three weeks.

The Kentucky Transportation Cabinet, Department of Highways, announced the eastbound lane would be reopened on Monday, Nov. 6.

The lane has been closed since August. When the contractor stripped away paving down to the deck, they discovered unexpected deterioration in the metal and pulled out of the project.

State engineers and the contractor have implemented changes to the bridge repair contract. The lane closure will remain in effect until approximately 8 a.m. on Monday, Nov. 6.

One lane will remain open at all times while the contractor works, the state says.