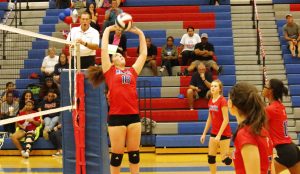 Sophomore Jaclyn Devine (18) looks to set up her teammates for the kill during the Lady Titan’s straight set victory over Danville on Tuesday, Oct. 10. (The Harrodsburg Herald/Arpan Dixit)

Sending seniors out with a win during their final home game is what every player and coach hopes for. The Lady Titans volleyball team defeated Danville in straight sets, 3-0 (25-12, 25-16, 25-18), to send their seniors home with a win on Tuesday, Oct. 10.

Senior Janelle Taylor had 11 kills and two blocks to lead the Lady Titans in both categories.

“I thought Janelle (Taylor) played very well and did a very good job being a leader out there,” said Flach.

Freshman Harlee Settles, who made the jump to the varsity squad due to Mercer injuries did a good job stepping in to a role she wasn’t used too according to Flach.

“Harlee (Settles) stepped up big time and did great for her team,” said Flach.

Senior Mariyah Sallee, Madison Kotek and Taylor all served the ball very well tonight. All three seniors won points for their team at  crucial stages of the match.