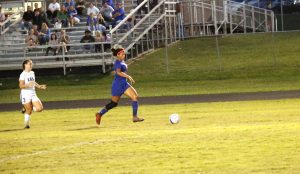 Freshman Bella Garrett scored two goals against East Jessamine in their victory over the Lady Jaguars on Monday, Oct. 9. (The Harrodsburg Herald/Arpan Dixit)

Freshman Bella Garrett got things started, scoring within the first five minutes, to put the Lady Titans up 1-0 very early in the game.

“I told our girls playing a team three times is tough, and when you beat them twice, the third matchup is always the hardest,” said Head Coach Josh Culver. “I told them coming out, this was going to be a fight and it was.”

Garrett scored her second goal of the game 10 minutes after her first one. A beautiful passing display put on by Mercer led to the ball in the box for Garrett, and she capitalized. The Lady Titans had a 2-0 lead 20 minutes in.

Unfortunately for Mercer, the Lady Jaguars were able to answer a short while after, scoring off a surprising header from the top of the box. The ball went over the reach of Prigmore and in the back of the net. Aside from that one goal, Prigmore had a great game, making key saves when she needed them.