Police are looking for the smash and grab bandits behind 19 vehicle break-ins reported Saturday morning.

A reward of up to $1,000 is being offered for information about the break-ins, which were reported on Saturday morning. The thefts are believed to have occurred overnight, with the first one being discovered and reported at 6:30 a.m.

The investigating officer, Capt. Scott Elder of the Mercer County Sheriff’s Department, said investigators are trying to determine how many people were  involved in the break-ins, but are not currently able to tell if any more people participated.

“We know of one person for sure,” Elder said.

Most of the break-ins were smash and grab jobs, with the thieves breaking windows and stealing property, including at least three firearms.

Two vehicles were also reported stolen, a Chevrolet Silverado pickup later found abandoned on Bohon Road and a Silver Kia Sportage SUV—license plate 977RJY—which the suspects used when committing some of the thefts.

Burglaries were reported at the Fountain View subdivision and near the railroad tracks on Bohon Road, on McCrosky Pike, on  Secretariat Drive and Man-O-War Drive (off Talmage-Mayo Road) and at the Lee Oaks subdivision off Warwick Road.

Mercer County Crime Stoppers is offering a reward of up to $1000 for information leading to the arrest and conviction of the perpetrators.

Anyone with information should contact Elder at the Mercer County Sheriff’s Department (734-4221) or Harrodsburg Dispatch (734-3311). Thefts in progress should be reported to 911. 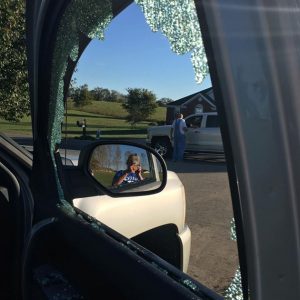 Police are looking for the smash and grab bandits behind 19 vehicle break-ins reported Saturday morning.