The Kentucky Department of Education has released the latest school report cards, and while both Mercer County school systems are happy this year, they don’t have any good grades to show for it. Since 2009, KDE has posted online school and district report card information about test performance, teacher qualifications, student safety, awards, parent involvement and more.

However, this is a transition year. The KDE did not assign labels to school districts. Even so, Burgin Independent and Mercer County School Districts are happy with their report cards for the 2016-17 school year.

Burgin officials were pleased with this year’s results, which showed the district building on its success last year, when they were named a district of distinction. Burgin Superintendent Will Begley was proud to note Burgin achieved a 100-percent novice reduction in math.

While the state did not rank school districts this year, many districts—Burgin Independent included—did. According to figures compiled by Burgin from the accountability summary spreadsheet, Burgin ranked third out of seven nearby school districts. Burgin High School ranked second, trailing only Boyle County, and Burgin Middle School ranked third, trailing Boyle and Casey County.

Begley was disappointed Burgin Elementary ranked 16th out of 20 nearby elementary schools, but attributed that to the small class sizes at Burgin compared to the other school districts.

“That’s part of the beast of being a small school,” Begley said. “We’re happy with what we have.”

Mercer officials have conflicting emotions about this year’s report card. Just when they feel like they’ve started to turn things around, the state did away with the rankings.

“Last year it killed us,” said Superintendent Dennis Davis. “This year it would have helped us.”

According to figures provided by school officials, Mercer County Intermediate School made progress in all three areas of achievement, gap and growth. The gap score—which is based on the performance of state and federally designated groups within the student body— increased the most, moving from a 37.3 in 2015-16 to a 68.5, while achievement increased from 66.3 to 69.2 and growth increased from 54.8 to 59.8. There were increases in achievement scores for on-demand writing, reading, mathematics, social studies and language mechanics.

“We moved dramatically from where we were a year ago,” said Davis, who said the Mercer Board of Education approved spending $50,000 last year in transportation and meal costs for after school tutoring. This year, spending was increased to $100,000 and tutoring began earlier in the school year. 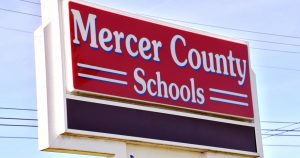 While Burgin officials were pleased with their continuing success, Mercer officials were frustrated that the state changed the ratings system just as they began to show signs of improvement.