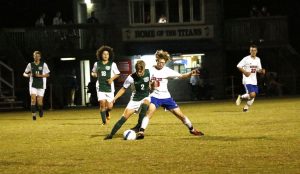 Sophomore Hunter Booth (right) battles with South Oldham’s Spencer Law’s (left) for possession of the ball during the Titans’ 3-1 loss to the Dragons on Tuesday, Oct. 3. (Photos by Arpan Dixit).

Winning your final game on your home field is the way every team hopes to end their final home stand.  Unfortunately, the Mercer County Titans soccer team (9-6-3) suffered a tough loss against the South Oldham Dragons(7-10-1), by a final score of 3-1.

The Titans started off the game a little slow, giving up a goal to South Oldham’s Asher Borgman in the game’s first three minutes.

Head Coach Garrett Stark talked about his team’s performance after the game.

“At the beginning of the game I thought we came out a little sluggish,” he said. “I thought we settled in after that, but we just weren’t able to capitalize on our opportunities.

The Titans had two shots go off the post. One by senior Brandon Ballard and one by junior Kola Raskins.

Ballard scored the lone goal for the Titans in the second half. The Dragons had an answer, scoring shortly after to put the game away.

The Titans have one final game before the district tournament at Lexington Catholic.