Blue Grass Airport was full of people waving flags welcoming Waterfill and the 65 other veterans home from the Honor Flight to Washington, D.C. on Sept. 16.

“I bet you there was a thousand people there waiting for us,” Waterfill said. “It was a whole lot better than when I came back from Vietnam.”

When he returned to the United States in 1967, protestors spit at him through the airport gates, he said. But not this time.

“It was wonderful,” Waterfill said, “I can’t say enough about it.”

He’s also glad he got to take the seventh Honor Flight to the nation’s capital. Waterfill and his son traveled with veterans from World War II, Korea and Vietnam to tour the war memorials in Washington D.C.

Representing 36 Kentucky counties, the veterans included 19 from World War II, 36 from Korea, and 12 from Vietnam, including Jack Mattingly of Harrodsburg.

Waterfill had nothing but good things to say about his host, Honor Flight Kentucky of Winchester, and the sponsors, Blue Grass Energy and Kentucky’s Touchstone Energy Cooperatives.

“I couldn’t ask for a better host,” Waterfill said. “They go out of their way to support the veterans.” 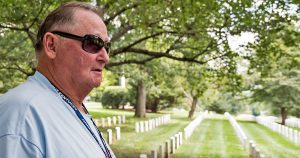 Darrell Waterfill is glad the service and sacrifice of Vietnam veterans are finally being acknowledged after years of being America’s forgotten warriors.
“We’re finally getting some recognition,” Waterfill said. “We didn’t when we came back.”