Nick Risden is fighting for his life after a single tick bite has left him battling several medical conditions as well as Kentucky’s insurance providers.

Risden, owner of K9 motivations and Von Risden Haus German Shepherds, lives and trains police and guard dogs in Salvisa. He was bitten by a tick in April.

As a result of the bite, Risden is battling a host of tick-borne illnesses, including Lyme Disease, Rocky Mountain Spotted Fever, meningitis and Powasson Virus. He has experienced short term memory loss and bacteria has caused his eyes to become hypersensitive to light. He has lost 30 pounds since May.

Risden has sought treatment throughout the state, but has had no luck. There are only 75 confirmed cases of Powasson Virus in history, and none of them have been treated in Kentucky before.

Risden has found a doctor in Washington, D.C. who is willing to treat him, but his insurance company considers the treatment experimental, meaning they refuse to pay for it.

State Representative Kim King has stepped in, asking the insurance company to pay for routine procedures that could be performed in Kentucky, but the cost of the Risden’s medication is $80,000, an amount he could not pay on his own. He cannot start treatment until he has a third of the cost pre-paid, which is roughly $25,000.

“If there is bad luck to be had, he’s had it,” said Rebecca Patterson, who is organizing fundraising efforts on Risden’s behalf.

Donations can also be made at Community Trust Bank, where a medical fund has been set up, or online at https://www.youcaring.com/nickrisden-956891. 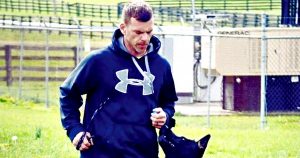