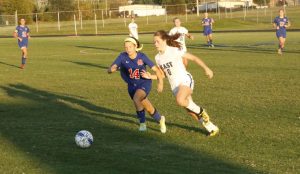 Freshman Hailey Lawson (14) battles for the ball with East Jessamine’s Lily Slusher (6) during the Lady Titans 2-1 over the Lady Jags on Thursday, Sept. 28. Lawson also assisted on an Aubrey Jones goal in the game. (Photo by Arpan Dixit).

Despite losing their last two matches against Nelson County and Bardstown, the Mercer County Lady Titans soccer team (3-7-1) earned a big district win at East Jessamine (6-9) win prior to those two games, defeating the Lady Jaguars 2-1.

Head Coach Josh Culver was pleased with his team’s effort, despite having a key player out due to injury.

“This was a hard fought match because we had to make adjustments after not having freshman Bella Garrett playing due to a foot injury,” he said. “The girls stepped up taking on different roles than normal.”

Junior Aubrey Jones scored a golden goal in overtime to give the Lady Titans their fourth win of the year, and a very important district win heading into the latter part of the season.

“The effort and intensity was there from everyone,” said Culver. “That’s the third game out of the last four we have come back from being down to win. We always seem to find ourselves being a goal down and then having to fight to come back so we’re working on that going forward.”

Jones also had another goal earlier in the game. Jones’ goals were assisted by senior Alyssa Howard and freshman Hailey Lawson.

Unfortunately after playing East, the Lady Titans suffered two close defeats to Nelson County and Bardstown. Both of those losses were by one goal, so the Lady Titans are just a few possessions and shots away from having a couple more wins.

“We have a lot of resiliency. We need to keep that up,” said Culver. The Lady Titans have just  two games left on the season against East and South Laurel before district play begins.