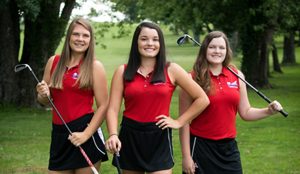 After making the state tournament last season, sophomore Bekah Upchurch missed state competition by one shot. It is a heartbreaking result for someone who has worked tirelessly to improve their game.

Head Coach Jeremy Brummett talked about the tough day her.

“Ending the season this way is tough. Bekah missing state by one shot this year after making it as a sophomore is hard,” said Brummett. “I feel for Bekah  because she played her heart out, just couldn’t get a putt to fall.”

Savannah Prigmore shot a 108 and Emily Bechtel. “Emily has become a much more consistent player and only being a freshman means we’ve got time to get even better,” said Brummett.

Prigmore, who is also on the Mercer County soccer team as a goalie, has split time between soccer and golf. “Savannah (Prigmore) played well being a two-sport athlete,” said Brummett. “Splitting time with soccer has hurt her being consistent but she’s got potential if she ever decides to solely play golf.”

Brummett said overall, the girls had a good season and saw a lot of improvement from last year.

Upchurch, who has played all season long, talked about the challenges of playing on a small team.

“It was  change for sure because you don’t have as many teammates to bond with and to keep you going when you have a bad day,” she said. “But golf is more of an individual sport. Each player still has their own individual score. You can’t call a timeout during a tournament and get someone else to come in and hit your shot. It is all on you to bring  in a low score.”

Upchurch has had a great season individually. She shot a career low round of 72 over the summer. She also won the Lexington Catholic Invitational, where she shot a 74.