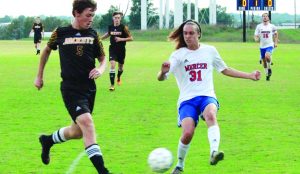 Woodford County’s offense opened the game applying pressure on the Titan’s defense from the wings. The Yellow Jackets earned four corners and two free kicks just outside Mercer’s 18-yard-box in the first 15 minutes of play.

“I thought we came out pretty well tonight,” said Mercer Head Coach Garrett Stark. “I was a little concerned with us giving up too many corner kicks. That put a lot of pressure on us inside the 18 (yard-box). We also gave up some free kicks right on the edge of 18 (yard-box) which were dangerous, but other than that I thought we played pretty well.”

Woodford turned those opportunities into three shots, and two on target, but none were able to beat Mercer keeper Jacob Cruz.

Despite having limited opportunities, Mercer’s offense struck first, capitalizing on a shallow Woodford County goal kick in the 16th minute. Mercer’s right  midfielder Luke Dean headed the goal kick back to the middle of the pitch to forward Brandon Ballard. Ballard was able to settle the ball, turn and fire a shot from 30 yards out that beat Woodford County keeper Chris Ramirez.