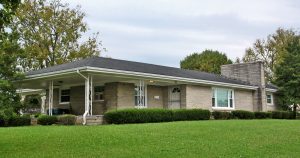 Residents of the Elizabeth Court subdivision oppose plans to level this home and build an urgent treatment center. (The Harrodsburg Herald/Robert Moore)

The residents of a Harrodsburg subdivision have united against a proposed medical clinic.

Meetings of the Harrodsburg-Mercer County Joint Planning and  Zoning Commission tend to be sparsely attended affairs. But not last week. It was standing room only as residents from the Elizabeth Court subdivision  voiced their opposition to a proposed urgent care center a developer wants to build at 684 South College Street.

The house backs onto Elizabeth Court, a small side street that sits across from McDonald’s. The property’s owner is asking for the land to be rezoned from residential to commercial, but his neighbors say no way.

“We’ve got a nice subdivision here,” said Maurice Baker, who’s lived at Elizabeth Court for 57 years. “We want to keep it residential.”

Baker and other residents  were concerned the builders would use dynamite to grade the site. They were also concerned with the unsightliness of dumpsters, traffic, drainage and the disposal of needles and medical waste. But they were really worried about the uncertainty of rezoning the property residential.

“If it’s commercial, they can put anything they want out there and there’s nothing we can do about it,” Baker said.