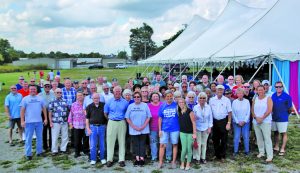 Current employees and retirees gather for a group photo at the picnic Corning held Saturday to celebrate 65 years in Harrodsburg. (The Harrodsburg Herald/Robert Moore)

Corning is celebrating the 65th anniversary of their Harrodsburg facility. It’s a birthday so big—for both the city and the corporation—that it’s taking two days.

On Friday, Sept. 15, employees and family were invited to tour the Harrodsburg facility and on Saturday, Sept. 16, there was a picnic celebration from 11 a.m.–3 p.m.

Corning began producing glass in Harrodsburg in 1952, using Lay’s Tobacco Warehouse as a temporary home until the factory was completed. The furnace was lit on Nov. 6, 1952, and the first piece of commercially made glass ever to be manufactured in Harrodsburg was produced on Dec. 16, 1952.

At first the plant produced ophthalmic and specialty glasses but they evolved to manufacture fusion-formed LCD glass, which was developed here in Harrodsburg in the 1980s.

Corning’s lucrative partnership with Apple Inc. began  in 2007, when Apple founder Steve Jobs, dissatisfied with the plastic screen on the iPhone prototypes, demanded a glass screen.