A proposed 16-bed transitional housing facility could be open by the first of next year, but organizers say they need the community’s support.

Chris McCoy, vice-president of the board of directors of the House of Grace, Hope and Mercy, gave the Harrodsburg City Commission a progress report Monday night.

The House of Grace is a family transitional housing mission, open to individuals and families seeking shelter, comfort and stability without judgment or condemnation.

Residents must not have criminal backgrounds and cannot be active drug users. They will be able to stay for up to six months at a time and can receive job training, attend addiction programs and conflict resolution classes and acquire the skills needed to break the cycle of homelessness and poverty.

“In a community this size, that is a great percentage,” McCoy said.

“But it’s only temporary,” McCoy said. “They don’t have a permanent address.”

She bristles when asked if the House of Grace would attract homeless people to Mercer County.

“They’re already here,” McCoy said. “They are our neighbors. They are our friends and family members.”

She said 62 children attending school at Burgin Independent or Mercer County Schools were classified as homeless during the 2014–15 school year.

Commissioner Marvin “Bubby” Isham asked McCoy and Bass how fiscally solvent the House of Grace was. McCoy said the shelter, which would be staffed by volunteers and students, had enough funds to stay open four months.

Once open, the House of Grace would qualify for grants, McCoy said, but first they need to open. She said the ultimate goal is to end homelessness.

“I know it’s idealistic, but I believe we need a little bit of that right now,” McCoy said.

However, she had some hard numbers to back her up. Based on studies, each displaced adult costs the community approximately $6,247 per year. Last year, Mercer County paid out $774,628 for rental assistance, heating assistance, clothing and food baskets among other services.

“The sooner we can get to work, the sooner this situation can get resolved,” McCoy said.

She and Bass said they would keep the board of commissioners apprised of House of Grace’s progress towards opening. Their request for funding from the city was turned down during the last fiscal year, but they said they would be applying again.

“We welcome your support,” McCoy said.

The public is invited to attend the next House of Grace board of directors meeting, on Thursday, Sept. 21, at 6 p.m. at St. Philip’s Episcopal Church parish house (118 W. Poplar St.). 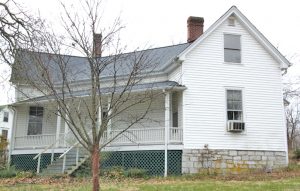 The organizers of the House of Grace, Hope and Mercy hope to have the transitional housing facility open by next year. But they need the community’s support.