A Mercer County native has been named Kentucky’s next Public Advocate.

Since joining the DPA in 1997, Preston has served as a staff attorney, director of trial offices and manager of the appeals branch. In 2007, Preston joined the DPA leadership team as director of the trial division. He was appointed deputy public advocate in 2011.

“As a career public defender, I am thrilled to be entrusted with the position of Kentucky’s Public Advocate,” Preston said in a press release. “I have been blessed to work under the strong leadership of past advocates Ed Monahan and Ernie Lewis and intend to continue their tradition of faithfully upholding the Sixth Amendment right to counsel in the Commonwealth. My goal is to improve our statewide system, which already provides excellent representation to indigent clients in the criminal courts of Kentucky.”

The DPA provides legal representation to low-income clients accused of crimes, fulfilling their constitutional right to a fair trial and to be represented by an attorney. 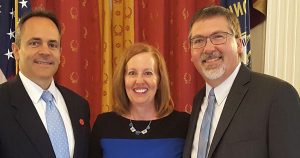 Preston was selected by Gov. Bevin from three candidates nominated by the Public Advocacy Commission. His appointment takes effect Saturday, Sept. 16. It is a challenging time to be a public defender, both here in Kentucky and across the United States.

He began his legal career as a public defender at the Legal Aid Society in New York City.

“Damon is a super fellow, a very skilled and conscientious attorney,” said Mercer County Attorney Ted Dean, who worked with the DPA for 10 years. “His appointment is a wonderful thing for the criminal justice system and the commonwealth.”