A trial date has been set for the accused murderer of Tristan Cole. Trenton Easterling’s jury trial will begin on Feb. 19, 2018, according to Judge Darren Peckler.

Easterling is accused of robbing and murdering Tristan Cole, a 17-year-old student at Mercer County Senior High School, in April 2016.

Peckler also ordered Easterling to be transferred to Boyle County Detention Center (BCDC). Easterling, who was still a minor when he was arrested, has been held by the Department of Juvenile Justice since April 2016. Easterling turned 18 while in custody, and his defense attorneys asked that he not be sent to BCDC, which they called the most overcrowded jail in Kentucky.

They asked for Easterling to remain with Juvenile Justice for at least another year, arguing he has been a model inmate since his arrest and is 2.5 credits shy of receiving his high school diploma. They said Easterling would not be able to complete his education at BCDC.

They pointed out that other inmates had been allowed to serve their time in the juvenile justice system until the age of 21.

Peckler said those inmates were convicted as juveniles. Easterling, who is being tried as a youthful offender, turned 18 before his trial began. Therefore the Department of Juvenile Justice had no statutory authority over Easterling.

“He doesn’t have the status to remain there,” the judge said. “He’s not a committed offender and he’s over the age of 18.”

After the hearing, Easterling was transported to BCDC to await trial. He was not the only one charged in connection with Cole’s murder to appear before Judge Peckler on Tuesday. 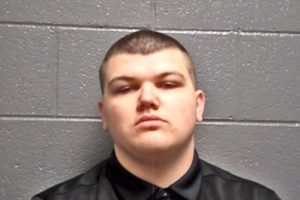 A date has been set for the trial of Trenton Easterling, who is accused of murdering and robbing a classmate at Mercer County Senior High School.