Motorists looking forward to the replacement of the 93-year-old Kennedy Mill Bridge have been looking around the lake for signs of construction work.

However, the action is taking place over at the Kentucky Utilities boat dock near the E.W. Brown Generating Station.

Buch said Walsh has brought in 250 loads of equipment so far, including two cranes. One weighs a half million pounds, he said. The big one weighs 1.2 million pounds.

The contractor is in the process of assembling a drilling platform, two barges connected by six-foot steel girders with underwater anchors.

Once the drilling platform is in place, the contractor will use strandjacks—big hydraulic rams which will be delivered this week from Switzerland—to lower four steel casings 180 feet down to the bottom of Herrington Lake.

“The amount of material under the water is huge,” said Buch.

He and his team come to Lake Herrington after working on the Ohio River.

“We don’t have the current here,” said Buch. “Certain things are easier but other things are a lot more challenging.”

There are two factors that makes replacing Kennedy Mill Bridge a unique job, he said. First, there’s the depth of the lake. Herrington is the deepest lake in Kentucky, and the area where the replacement span will stand reaches nearly 180 feet down.

Another obstacle is the lack of access points to the lake, which was created when KU flooded a ravine nearly a century ago. While the lake is very deep, the ground surrounding it is much higher.

“Those are the two biggest hurdles we’ve got to overcome,” Buch said. 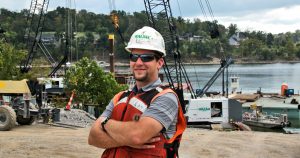 Kevin Buch of Walsh Constuction poses before the KU boat docks where his employer is preparing to build the replacement for the Kennedy Mill Bridge.