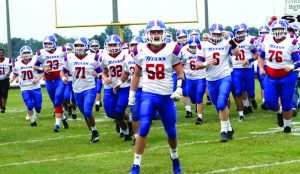 Junior Blake Russell (58) leads the Titans out on to the field for their matchup against Anderson County on Thursday, Aug. 31. (The Harrodsburg Herald/Arpan Dixit)

Last week the Mercer County Titans (2-0) football team erased an 18 point deficit to come back and beat Franklin County. Unfortunately for them, the comeback against Anderson County (1-2) was a different story.

The Bearcats defeated the Titans 21-19 in an exciting finish on Thursday, Aug. 31,  when the Titans attempt to tie the game in the final seconds.

Mercer struggled to get anything going offensively and Head Coach David Buchanan expressed his frustration.

“Bottom line, Anderson County did a good job throughout the whole game and came up with a good game plan,” he said. “The mistakes we made are on me, the head coach.”

The only Titan with positive yardage on the ground was senior Jackson Lewis. Lewis had himself a night. He had 10 rushes for 104 yards and one touchdown on the ground. He also had five receptions for 106 yards and one touchdown receiving. That is the first 100 yard receiving game and 100 yard rushing game any player has ever had as a Titan.  Despite the loss, Lewis has been really strong the last two games and has spear headed the Titans rushing attack, while also being  equally effective in the passing game. In an eye opening stat, Lewis had 284 of the 354 total yards for Mercer. That also includes Lewis’ kick and punt return yardage.

It was the defensive side of the ball that had  the Titans frustrated throughout the night. Anderson County coughed the ball up on numerous occasions, but were able to recover their own fumbles and continue their possession.

“Usually we recover those fumbles and we usually win the turnover battle,” said Buchanan. “It was very frustrating to have opportunities to blow the game open and fail to do so.”