Hurricane Harvey’s wrath has left people all around the globe wanting to help in anyway possible. Despite the willingness to help, it can be hard to truly understand the disaster without being there.

Sisk, a Mercer County resident with homes in Houston and Harrodsburg, was in Houston when Harvey struck. She says it was unlike anything she had ever seen.

Almost 52 inches of rain inundated the city of Houston. However Sisk said she stayed safe.

Despite the flooding, Sisk’s home remained dry. She said her home sits on a high point, roughly 25 feet higher than the banks of a nearby river. Sisk was able to walk around her neighborhood and watch the rescue operations.

“We saw people with boats everywhere,” Sisk said. “There were so many volunteer cars parked on the streets, it was like an obstacle course.”

Sisk witnessed a boat rescue. She saw three women—a middle-aged woman on crutches, a woman carrying an infant and a woman carrying a puppy—were rescued on a boat. She said what the carried onto the boat with them is all they had after the storm was over. Many Houston residents didn’t have flood insurance.

Sisk said efforts to rebuild Houston, the fourth largest city in the United States, are already underway. People are cleaning up their water-damaged belongings. She said large piles of carpet, furniture and other wreckage are seen in nearly every yard. 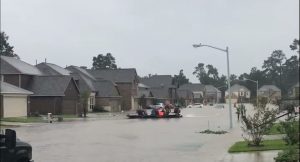