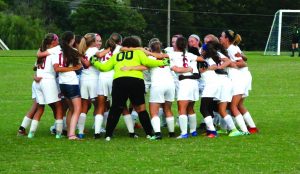 The Lady Titans soccer team gets pumped up before their big district match against West Jessamine on Wednesday, Aug. 31. (The Harrodsburg Herald/Arpan Dixit)

Mercer played well the first 30 minutes of the game by making crisp passes, controlling possession and making defensive stops when the Lady Colts got into the final third of the field. The remainder of the game was a different story.

The Lady Colts scored two goals within the last 15 minutes of the first half and never looked back.

Lady Titan Head Coach Joshua Culver talked about playing against a team like West after the game. “Well the beginning of the game didn’t look too bad. We held them scoreless for 25 minutes and eventually we got a little tired and they took full advantage,” said Culver. “They do a great job of attacking the goal line and keeping possession.

Culver said his team has to do a better job defensively by marking up and covering for one another.

Senior goalkeeper Savannah Prigmore made  some really good and athletic saves in the first half. Unfortunately, the West Jessamine attack kept coming and they eventually scored off a couple corner kicks and free kicks. Prigmore saved 63 percent of the shots she received on goal.

Despite the loss, Culver was pleased with the way his team competed in the first half against arguably the best team in the state. “But you know overall, to hold the defending state champions scoreless for the first 30 minutes of the game, was a great thing to see, he said.

Although his team was shutout, Culver saw flashes of what this young team can become when they all play together and for one another.

He said he hopes to get a lot out of this week of practice and will make sure the Lady Titans are ready for their next match.