Jack Mattingly of Mercer County is being inducted into the Kentucky Veterans Hall of Fame. Two weeks ago Mattingly, a former sergeant in the United States Marine Corps, stood on the Capital Rotunda in Frankfort with the rest of the inductees while speeches were made and skydivers leapt from a plane.

It was quite a turnaround. Ten years ago, Mattingly didn’t even tell people he’d served in Vietnam. His wife Kathy didn’t know he was a veteran until he woke her one night screaming, “Get down! Take cover!”

The next morning, Kathy asked him if he’d had a flashback.

“I didn’t have anything,” he told her.

Mattingly didn’t wear shirts or hats proclaiming his service. When he returned from Vietnam in 1971, he’d been told to take off his uniform and wear civilian clothes so as not to attract attention from protestors.

“A lot of restaurants wouldn’t let us in and eat,” he recalled.

Mattingly learned to hide his service. He kept hiding it for the next four decades.

Until 2010. Until he saw the traveling replica of the Vietnam Wall at a county festival in London, Kentucky.

“I walked up to that wall and I broke,” Mattingly said.

It all came back. Mattingly spent a year in country, as the servicemen used to say. He was stationed in Da Nang outside the Marble Mountains, working in the secret and confidential files office. Sometimes he served as a doorgunner, strapped to a helicopter as it ferried personnel to and from the battlefield.

That day he touched the wall, it all came back. The kids in the helicopter screaming for him to not let them die, men begging him to take care of their children, their wives and their families if they didn’t make it back.

Mattingly was just a kid. He’d graduated high school just 10 days before joining the Marine Corps in 1969. Before going to boot camp in San Diego, he’d never been west of the Mississippi. Before being sent to Vietnam, he’d never been outside the United States.

And there he was, an apple-cheeked boy in Buddy Holly glasses in a helicopter full of dead and dying men. 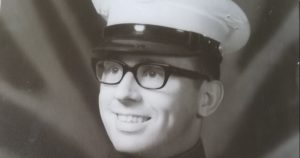 Jack Mattingly as a fresh-faced Marine. 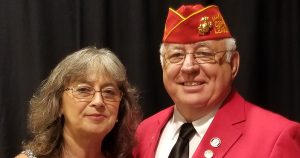 Once he saw the names of his fallen brothers on the wall, everything became clear.

“I figured the reason I came back was to represent those guys on the wall,” he said. “That’s what I’ve been doing ever since.”