There has been a change of plans on the Brooklyn Bridge, officials say. The contractor found the bridge needed more repairs than planned and stopped work, leaving only one lane open and Mercer motorists wondering what went wrong.

While the state still intends to complete work this fall, no schedule for completing the project has been finalized, said Natasha F. Lacy, public information officer with the Kentucky Transportation Cabinet Department of Highways District 7.

State engineers and the contractor are currently in the process of implementing changes to the bridge repair contract, Lacy said.

Repair work on the bridge—which carries U.S. 68 over the Kentucky River—began in July. It was scheduled to be completed on Aug. 11.

However, the construction crew hired to strip the bridge and apply an overlay pulled out two weeks ago after realizing the bridge’s deck needed more extensive repairs, said Mercer Judge-Executive Milward Dedman, who spoke with state officials.

That’s pretty much what the work crew told David Rittgers, who lives next to the bridge on the Mercer County side.

Rittgers said the paving crew would come to his home and borrow water. He said workers said they had found what Rittgers called “rotten spots” on the bridge and they needed someone else to come and repair it.

“They said they couldn’t touch the other side until another company came and checked out the metal,” Rittgers said. 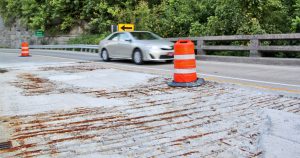