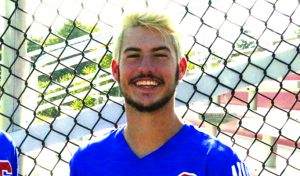 Senior year is always filled with a roller coaster of emotions as the year progresses. Mercer soccer senior Brandon Ballard is currently experiencing those emotions. The senior striker broke the school record for goals scored, previously held by Cody Shackelford. “It’s an amazing feeling and I couldn’t have done it without all my teammates that have helped me along the way,” said Ballard. “Even though this is an individual record, my team now and my previous team is the reason I have this record.”

Winning region titles and getting to play at the state tournament, which Ballard has done, is something every player wants to experience. Breaking school records is just icing on the cake.

Ballard has had an impressive start to the season, scoring 10 goals in the Titans first three games.

He scored one against Somerset, five against Pulaski County and four against Lincoln County. That is a impressive start to the season for Ballard, who is looking to take his team to three straight region titles. “The feeling of scoring those goals is surreal,” said Ballard. “The night I scored all of those goals it felt like every shot I took was going to go in.”