The owner of a pit bull that attacked a 6-year-old boy in Mercer County had pled not guilty to charges of harboring a dangerous animal.

According to the arrest warrant, the incident happened on Wednesday, July 26, a little after 2 p.m. here in Mercer County. Capt. Scott Elder of the Mercer County Sheriff’s Office said Jordan Lee Miller, 25, of Danville, was visiting a friend when Miller’s pitbull attacked a 6-year-old boy. The attack, which was “unprovoked and for no reason” according to the arrest warrant, “left the boy with serious facial injuries that required long-term medical care.”

Miller fled the scene without bothering to find out how badly the child had been injured. He also refused to cooperate with the investigation, according to his arrest warrant.

He was arrested on Sunday, Aug. 20, in Danville and charged with tampering with physical evidence and harboring a vicious animal.

Miller was also charged with 2nd-degree burglary. According to the arrest warrant, he tried to force his way inside a Mercer County home via the bathroom window. When confronted by the victim, Miller fled on foot, escaping in what was described as a gold Honda SUV.

He was arraigned earlier this week in district court. He pled not guilty to both charges and will return to court for a preliminary hearing on Thursday, Aug. 31, at 1:30 p.m.

Miller is being held in Boyle County Detention Center on a $20,000 no contact bond.

Elder said the 6-year-old victim seemed to be “healing well.” 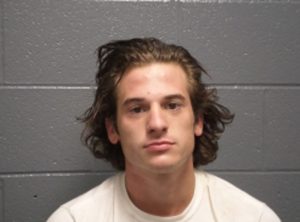