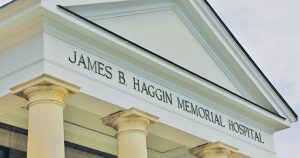 Bridges was asked last week about a possible merger between McDowell and the James B. Haggin Memorial Hospital.

“I just don’t have anything to say,” Bridges said.

Rumors of an impending merger have an increased because of two recent events: the city of Harrodsburg’s recent decision to allow the Mercer Family Education and Wellness Center to sublease their building—formerly the Wilderness Trace YMCA—to McDowell and a notice in the Advocate-Messenger advertising the incorporation of the Ephraim McDowell Haggin Physicians LLC in Danville.

Bridges had no information about the physicians’ group, but discussed McDowell’s plans for the former YMCA building.

While noting a formal lease has not yet been signed, Bridges said the Danville-based healthcare provider intends to open a facility similar to McDowell Wellness Center in Boyle County.

“Our intention is to fill a void that may exist in Mercer County” since the YMCA’s gym closed several years ago, he said. Regardless of where they joined, members would be able to use either facility, he said.

something open by the fall,” Bridges said, while noting that a lease agreement has not been signed and McDowell has not ordered any fitness equipment yet.

Haggin CEO Vicki Reed has not responded to a request for a comment.