Campbellsville University has formed a men’s basketball team that will be exclusive to the Conover Education Center in Harrodsburg.

Sean Tyree started working for the University as an independent contractor last summer and began discussing the possibility of putting together a basketball team with Campbellsville Executive Director of Outreach Wes Carter.

“It started out as a dream, we didn’t know it was going to go this far. This is what we were aiming for,” Tyree said.

A 2010 graduate of Mercer County Senior High School, Tyree served two tours in Afghanistan as a member of the United States Army. When he returned home, he wanted to invest in the future of the community. On July 1, he was named head coach of the basketball team.

“We want to get the community involved, that is my biggest focus. I believe we are putting together this team in Harrodsburg to afford kids an opportunity to play college basketball here,” Tyree said.

The team will practice and play in the former Harrodsburg High School gym, a gym rich in athletic history.

The gym was home to the Harrodsburg Pioneers before the 2006 merger. Since then, the school has served a wide variety of purposes, including housing the 9th grade academy, before being sold last year. 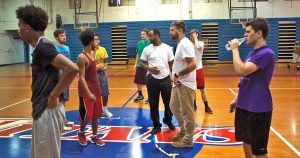 First year head coach Sean Tyree (center, in white T-shirt and tan pants) sees the new basketball team as a rallying point for the community. “It is something everyone can come together and watch,” Tyree said.