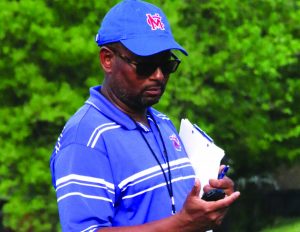 Mercer track head coach Terry Yeast times one of his players during a heat this past season. (The Harrodsburg Herald/Arpan Dixit)

Winning back-to-back state championships in boys’ track comes with perks, and head coach Terry Yeast is being recognized for his efforts.

Yeast was named boys high school coach of the year for the state of Kentucky for the 2017 track and field season by the U.S. Track & Field and Cross Country Coaches Association (USTFCCCA). Yeast also received the award last year.

He attributed the award to his student athletes and his staff.

“I get the award because I am the head coach,” said Yeast. “We have an amazing staff who are dedicated to our kids. I think that plays a major role, and the kids have truly bought into the program.”

Yeast said when he got back into coaching, he wanted to individualize the staff. He didn’t want it to be about boys and girls, he wanted his staff to coach both of them in their individual events.

According to Sam Seemes, of the USTFCCCA, this award is based on the performance of the Mercer County Senior High School team throughout the 2017 seasons and is a reflection of the hard work of the student athletes, the coaching staff and administration of the school.

If anyone deserves this award, it is Yeast. Along with leading the boys track team to back-to-back state titles, he also guided the girls team to a fifth place finish at state, their highest finish ever.