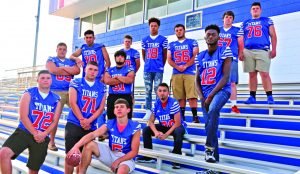 Head coach David Buchanan knows all about turning a program around and building a successful one. Everywhere he has went, his team has showed improvement every season. He turned the Paris High School football program around, winning two district championships in ‘93” and ‘94”. Shortly after, he guided Mason County High School to a record of 150-72 in 19 seasons, all while coaching players like Darius Miller, Chris Lofton and Terrence Commodore.

He made the state quarterfinals five times from 2001-2015, including two state semifinals appearances. Buchanan took over a program at Mason County who was 63-112 prior to his arrival. Numbers never lie and Buchanan proved that everywhere he has coached.

“What the past has done for me is I’ve learned that when you feel like the wheels are coming off, if you just keep your composure, you can fight your way out of it,” said Buchanan. “That’s what the past has helped me with, is there have been so many times it felt like the wheels were coming off, and just by continuing to do the things we know are right, we can work our way out if it.”

Senior Gunnar Gillis will be under center this season, his second season as a Titan after transferring from Anderson County. Gillis threw for 1,800 yards and 20 touchdowns his junior season, a number he hopes to increase this year.

Seniors Trevon Faulkner and Aaron Johnson will be lined up at wide receiver for the Titans. Johnson and Faulkner are two of the most athletic players the Titans have on the team and they will have many opportunities  to make plays out in the open field. The luxury of having athletes who can leap like Faulkner and Johnson is they can make plays that most players can’t. Expect a lot of jump balls this season.

Sophomore Kaelin Drakeford will be the other receiver who can be added to the list of one of the most athletic on the team as well. Junior Jon Jon Logue is also a impact player rushing the ball and receiving to the pieces are there for Mercer to have a special offense in 2017. Drakeford will also be the backup quarterback to Gillis and will be ready if called upon. The wide receiving core for the Titans can be special this season with three receivers who are capable of breaking out a big play.